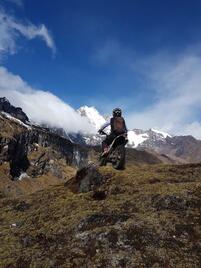 The 80-minute adventure documentary film begins at 7pm and will be followed by a Q&A with the filmmaker. Admission is $10 at the door.

Scott Englund started in the film industry as a guy with the ambitious idea of making a quality feature length film with a compelling story. No film school. No film knowledge. No film experience. Three years later Englund found himself watching his film, Never Ride Alone, for the first time in a real theater, on the big screen, surrounded by an audience of 400 viewers. It was a wild dream fulfilled. That was just part of his story.

Stories have always been a part of Englund’s life. From his childhood running around on a little ranch in northern California, to growing up and going off to college, starting a family and career in Idaho, and then off on a ten year adventure in South America, Scott’s story has many angles.
“I wanted to make a film, so I became a filmmaker.” Englund says. “At first it was a ridiculous idea. Then it continued to grow into reality. Now I show it on the big screen and it makes me emotional.”

Englund set out with a basic story idea. It was a simple story of overcoming impossible obstacles.  From there, he broke down the obstacles into bite size parts and tackled each one.
The first obstacle was the physical journey. Scott wanted to attempt to conquer a dirt bike route, which had defeated him so many times before. It was an area deep in the Peruvian Andes that had never seen the tires of a dirt bike. The solution to the problem of crossing the trial was to get stronger, and ride better.

The second obstacle was to learn how to make film. The GOPro camera had a permanent place on every dirtbike ride that Scott took. However, the limitations of one camera, was too much. Englund began a quest to learn as much as he could about film techniques, camera options, editing, sound engineering, and coloring. With no formal film school education, Scott took to Youtube and other online tutorial resources to develop his craft.

Often Scott would find a great shot on another film, learn how it was done, then go out and try it. Sometimes it would turn up a great piece of film. “I can’t tell you how many times I would go out for a whole day and only come back with three seconds of usable footage.” Englund says. “It was super frustrating…That is until you capture the perfect clip. Then it makes it all worth it.”

The third obstacle Scott overcame was to combine the exhausting ride with capturing the journey. Scott points out, “I would often go out and train by riding really technical trails at altitudes over 15000ft just so I could practice setting up the camera and getting the process dialed in. I couldn’t afford to lose any energy on the big ride, so I would practice for hours.”

“I had nobody to pilot the drone. I had to figure out how to program a route, then set the controller down, start my moto, then ride through the shot quick enough that the battery wouldn’t die before I got back to the controller.” Scott says as he continues to explain the process.  “I also had countless clips where I had to hike up the trail to set up a camera before going back to ride through the final shot. It was exhausting, but I had no other way.”

For audio, Scott described how he made a makeshift sound studio in the closet under his stairs. He lined it with pillows and blankets, and made it work.  Englund is a breathing example of being able to make it work.

The film is now complete.  Englund is pleased with how it turned out. After a couple of successful film festivals, Scott is more encouraged than ever to share his journey with a larger audience.

Englund dreamed that one day he could see his film on the big screen. That day has come once again.  Hope you enjoy the show!
​
​https://www.youtube.com/watch?v=cv4IGaSnRMU