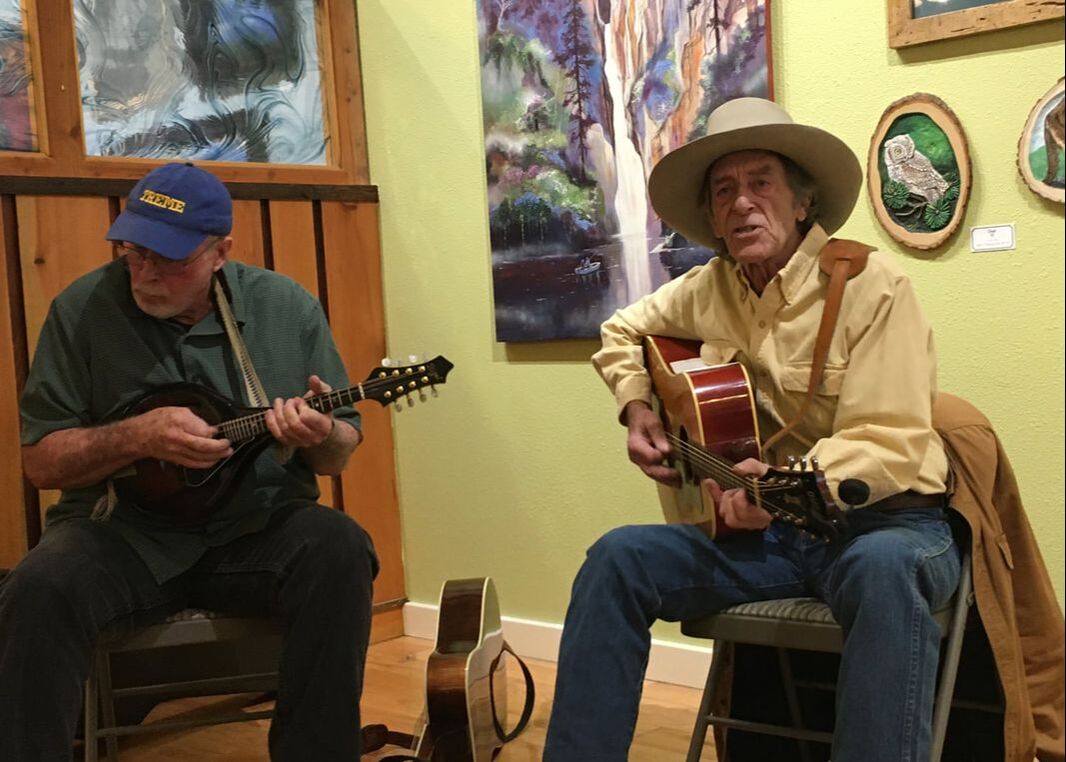 ​Joe Tomaselli and Ken Cawley will be the featured performers during the January 14 virtual Words & Music. These two musicians have been playing together for longer than either of them can remember. They have influenced each other in multiple ways and, even so, remain long-time friends.

Joe Tomaselli has been a singer songwriter and consummate entertainer for several decades. Lately he has mostly been playing around the campfire barbeques at Greenhorn Ranch where he works as a horse wrangler and resident teller of “tall tales” based, at least partially, in historical fact. He has spent a lifetime exploring the world he lives in and then turning it into song. This collision of lyric and life gives birth to a country style of roots music called Americana. With songs inhabited by cowboys, lost loves, railroad men, hard workin' families and even some of our own neighbors, Joe spins a tale of life the way he feels it.

Ken Cawley is a remarkably accomplished musician who has probably played with more musical groups in the county than almost anyone else, thus sealing his position The go-to sideman. Since retiring he has been doing a darn good job of playing music all the time. When not playing music around these parts, and when traveling was still an option, Cawley ventured to some of the great music cities of America and beyond seeking out the places were where local musicians get together. When found he sits himself down to play along with some new folks.

In continuing efforts by Plumas Arts to keep local music and musicians in the limelight as best as can be done these days, the 2021 Words & Music will continue in a virtual format until we can all be in the same room together again. November and December 2020 Words & Music presentations went out online and were very well received. You can connect with Words & Music from plumasarts.org https://www.plumasarts.org/wm-january-2021.html or the Plumas Arts YouTube Channel https://www.youtube.com/channel/UCGWoU-fxFXS6VtEe9A11fTw/videos. Archives are available at https://www.plumasarts.org/wm-virtual-archive.html.
Words & Music has been a program of Plumas Arts for more than 30 years, featuring acoustic performances of music and the spoken word where it has taken place at Patti’s Thunder Café. Modest admissions were charged at the door when it was an in-person event, now that it is offered virtually it can be viewed admission free.
Should you be inspired to make a donation to Plumas Arts to benefit presentations like these and the work they do to make and keep our beautiful place in these Sierras a thriving arts culture, just click the Donate button on plumasarts.org. Donations are greatly appreciated and tax deductible.