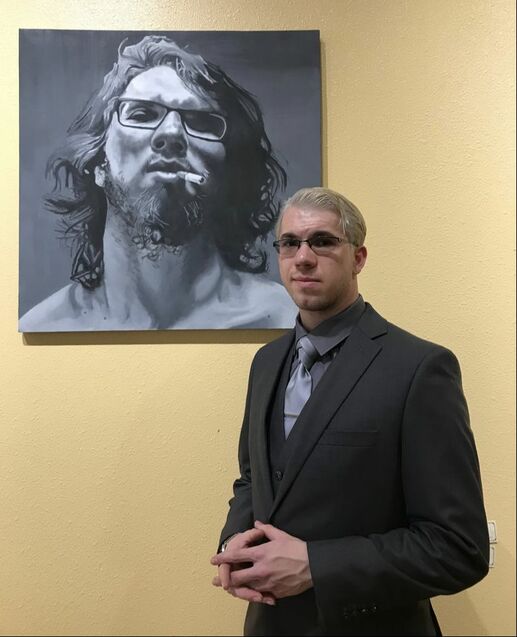 The Plumas Arts Gallery, located at 525 Main Street in Quincy, will host an opening reception on Friday, April 5 for and exhibition by Matthew Anderson entitled “The Gray Area.”
Matthew Anderson has been an artist all his life, enjoying drawing since he was a toddler. In a 4th grade class project where students were to make a drawing from a photo he began to see that he had a talent. When his drawing was put on the wall along with those of his classmates he realized that he saw the world totally differently than anyone else.

Drawing became all that he wanted to do. At one point his teacher stopped him from drawing in class because he wasn’t getting his other class work done.

At Quincy High School he made sure he had an art class every semester. He knew then that he had to make a career of art in some way.  He was inspired by a class visit by Seamus Gallagher, a local artist who went on to become a video game designer, but that was not where his talents lay. His medium of choice was pen and ink, so for a while he thought about doing tattoo art. But where he really found his muse was in portraiture.

Anderson identifies challenges he has in communicating that made school troublesome for him. He found that he could communicate through drawing and that in doing so he was making interactions. “Art has put value into my life.”

When he went to FRC he enrolled only in art classes. There he worked with Rafael Blanco who opened up the world of painting to him. “Painting is almost like a dance with the paintbrush and the oil pulling and pushing the paint across the canvas.”
Matthew’s show is entitled “The Gray Area” for a couple of reasons. One is that a number of the works in the show are painted in the gray scale.

The other is more philosophical. His paintings are of people. “People are complex creatures; combinations of good and bad moments and weaknesses and strengths.” His portraits, like people are a mixture of shades of light and dark.  Contrast of value is what makes up the whole; neither is all black and white.

A signature piece in the show is a portrait from a photo of Willie Vicarage, a WWII British soldier who was grotesquely disfigured in battle. The image is compelling. Transforming a monstrous visage into something beautiful that represents what this person stood for: Courage, Honor, Sacrifice and Responsibility. In Anderson’s depiction of the soldier he works to transform the image into something beautiful.

The Plumas Arts Gallery also currently features wood turnings and carvings by Taylorsville artist by Donald Aitken as well as a variety of works by member artists.

The exhibit will hang at the Gallery through April 27, 2019. The Plumas Arts Gallery and office hours are currently Wednesday, Thursday, and Friday from 11am to 5pm or by appointment.

You may also visit Plumas Arts on the web at www.plumasarts.org for more information about their programs, and to see the gallery exhibition schedule for 2019 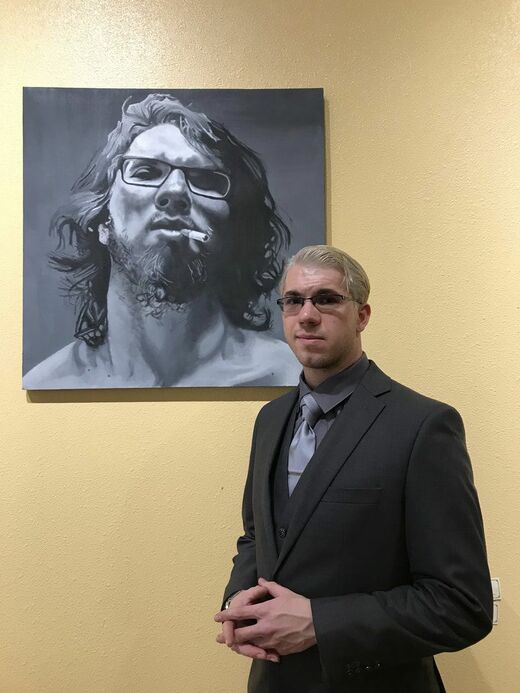